In some segments of the automotive industry, things are happening pretty fast. In others, they are going at a pretty steady pace. This large luxury SUV definitely belongs to the latter. The current generation has been around for more than a decade and Nissan doesn’t plan to change it in the near future. Simply, it is still a relevant player in the segment and that’s why we have no doubt that the 2022 Infiniti QX80 will be a typical carryover model, with the possibility of minor changes only.

So, you may count on a familiar layout. This SUV looks good and offers a pretty long list of standard features. We also like its powerful V8 engine, even though it’s quite thirsty. Also, handling is really good, considering the size and weight, while the cargo area offers a lot of space. On the other side, the interior looks a little bit old, while the third row is tight. 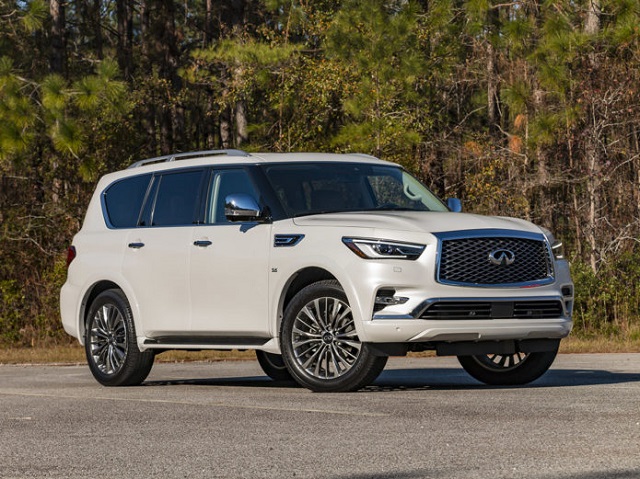 As we already mentioned, the current generation has been around for more than a decade. However, we saw a couple of updates during this long production cycle, so the styling is actually one of the model’s strongest points. It was updated three years ago, when we saw a significant makeover, based on the Monograph concept. The overall appearance is halfway between futuristic and conventional aesthetics, and that looks really amazing in this case. We expect no bigger visual changes in the 2022 Infiniti QX80, though there is always room for minor updates like new color options etc.

Mechanically, this model hasn’t changed too much since the initial launch. Of course, it rides on a good-old F-Alpha platform and shares most parts with the Nissan Patrol, though there are few differences in terms of the suspension setup. This model is not just luxurious, but also offers decent off-road performance. The ground clearance is around 9.1 inches, which you may also count on a two-speed transfer case. However, the standard low-profile tires aren’t particularly off-road friendly, so upgrades in this aspect would be necessary.

On the inside, the 2022 Infiniti QX80 will continue to offer things that are good, but also things that aren’t that good. Considering the model’s age, it’s no wonder that the dashboard looks a little bit old. Of course, it’s far from bad and materials and build quality are really good. However, rivals like Lincoln Navigator are much younger and look much more upscale. 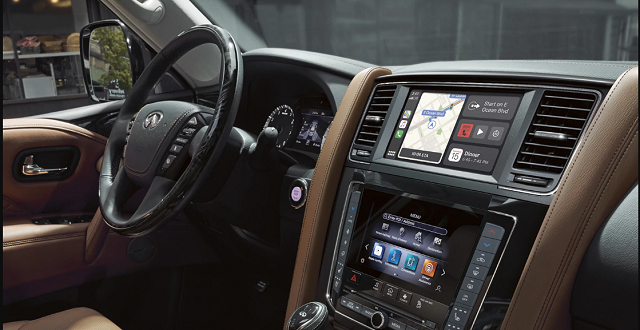 On the other side, there is nothing to complain about in terms of comfort. The front seats are massive and supportive, while the first and second rows offer plenty of space. The third row is a little bit tight but can be useful for kids and adults on shorter trips.

Some of the rare novelties for the next year will probably be additions to the list of standard equipment. Still, we have no doubt that most of the things will remain unchanged compared to the current model. The current model comes standard with keyless entry, push-button start, tri-zone climate control, moonroof, 8- and 7-inch touch screens, a navigation system, Apple CarPlay, Android Auto, Bluetooth, four USB ports, HD Radio, satellite radio, and a 13-speaker stereo. Additionally, you can get goodies like a 17-speaker sound system and a rear-seat entertainment system with two 8-inch displays.

Under the hood, the 2022 Infiniti QX80 will continue with a good-old 5.6-liter V8, which puts out around 400 horsepower and 413 pound-feet of torque and comes in pair with a 7-speed automatic transmission. Such a setup is more than adequate for an SUV like this and driving dynamics are actually very good. Also, you may count on 8.500 pounds of the max towing capacity, which is quite good for the segment.

On the other side, fuel economy could be better. You may count on 14 mpg in the city and 20 mpg on the highway, which is below average for the class.

Considering that there are no bigger changes to come, we presume that the 2022 Infiniti QX80 will hit the market sometime late in the year. We expect that the starting price will go around 70.000 dollars.