Despite the huge expansion of crossover, compact sedans and hatchbacks still have a quite big share on the market. That’s the reason why the Japanese manufacturer is introducing an all-new version of the popular Sentra sedan. The new generation will come as the 2020 model year, so the second production year, in the form of 2021 Nissan Sentra, shouldn’t feature bigger changes.

The new model will have a premiere in a couple of days and we are about to see a lot of interesting novelties. Still, it looks like the company will leave some of the novelties for the next year as well. This particularly refers to the performance version, which probably won’t be ready for the initial launch. On the other side, base models will come with notable improvements over the previous generation in various aspects, including driveability, comfort, performances etc. We expect to see 2021 Nissan Sentra in about a year.

In terms of base design characteristics, the 2021 Nissan Sentra will come with all the novelties that were introduced with the 2020 model year. This means a complete redesign, which includes significant changes both in terms of mechanics and aesthetics. One of the first things we should mention is that the new model is about to ride on a new CMF platform, which promises improvements in various aspects. Also, it will be bigger than the outgoing model, as we are about to see slighlty longer wheelbase and overall length.

Also, it will be slightly wider, which promises better handling and overall driving characteristics. As you may presume, the 2021 Nissan Sentra will have a lot in common with the recently introduced Sylphy. The mechanics will be largely the same, though the new Sentra is expected to come with multi-link rear suspension, instead of torsion that can be found in the Chinese sedan.

This also refers to styling. The two models should look pretty much the same, which means that the 2021 Nissan Sentra will follow the brand’s latest design language. Count on the latest take on the famous V-motion grille design, which brings a much sharper approach. Besides the new front face, the new model will also sit lower, which promises a better look and better driving characteristics.

The interior is definitely one of the most impressive things about this sedan. Judging on the photos, we are about to see a pretty upscale cabin, with loads of quality materials. The dashboard will look very sporty, thanks to details like round air vents and flat-bottom steering wheel, while a tablet-like touchscreen on the center stack clearly indicates we can count on all kinds of tech goodies. The Sentra has always been generous in terms of the interior space, so we have no doubt the new model will continue in the same way and even deliver slightly more legroom than the outgoing model. 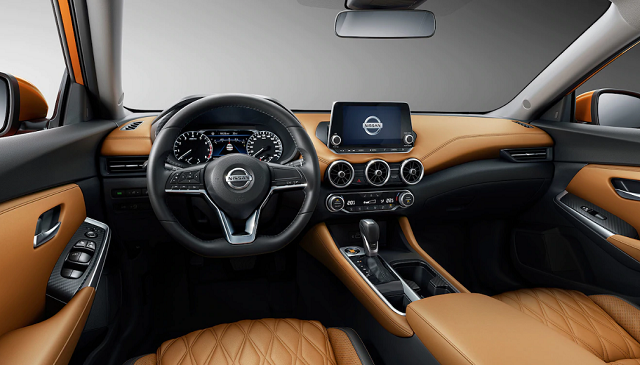 When it comes to the powertrain, the new generation brings changes under the hood as well. At this point, we know that the 1.8-liter unit will be replaced with a new, 2.0-liter engine, which is good for about 140 horsepower. Also, there is a big chance that a CVT will be the only gearbox in the offer, at least when it comes to standard models. On the other side, we are still waiting for the details about the performance version. Most likely, the Nismo version will come in the next year, with notable upgrades over standard versions.

Of course, we also count on a version that will get treatment from Nissan’s famous performance divisions. The 2021 Nissan Sentra Nismo will come next year and it will bring various improvements over the standard model. First of all, we expect to see the same 1.6-liter turbo-four engine, which will for this occasion probably get slight tuning and a max output should go around 200 horsepower.

Besides the powerful engine, we count on various mechanical upgrades, particularly in terms of new suspension setup. The Nismo Sentra will sit lower and also feature new brakes. All these upgrades should provide a lower center of gravity, which in practice means better cornerings, acceleration, braking etc.

Finally, count on visual upgrades. Of course, the first thing that comes to mind is a new body kit. This includes things like new bumpers, spoiler, side skirts etc. Also, we count on new, bigger wheels, low-profile tires, exclusive color options etc. Of course, Nismo touches are expected inside as well.

We expect to see 2021 Nissan Sentra in about a year, sometime in the third quarter of 2020. When it comes to the price, we presume that base versions will go around 18.500 dollars. Some of the key competitors are models like Toyota Corolla, VW Jetta, Hyundai Elantra etc.